I am a fckn artist!

I Cevapi are tasty 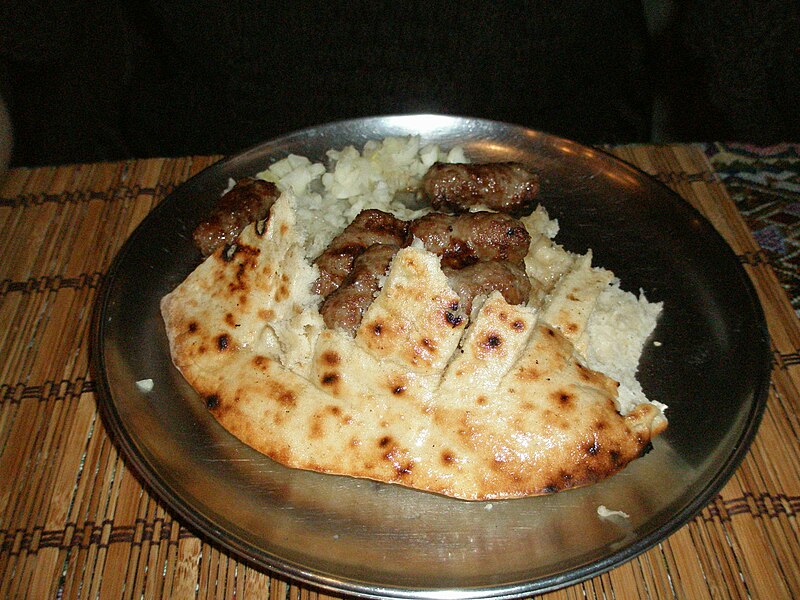 It all started with one pro porn feminist from Bosnia tweeted ironically how her boyfriend thinks she cannot eat equal amount of cevapi- pieces of grilled minced meet,  as he can, which showed up on my line. I want to believe that personal and private is also political still, I am usually very shy to do it and I almost never comment on people’s choices of food in private life except when they ask me about it. However, when they post images and tweets bragging about how they eat animals I find this to be public speech. Public hate speech against animals and its easier for me to react.

What is important in the context of social movements is how people who participate in them have much more opportunities to think things more critically. We also perceive ourselves as the ones who are critical, committed to the issues of justice, equality, and solidarity, protection of helpless and subaltern. Still, regardless of our activism, unfortunately, we are not divine. As other humans we tend to have strong motivation not to see our own injustices, and how we do not treat others equally, how we are not in solidarity, and how we do not protect helpless and subaltern, rather we enjoy eating them.

In Serbia very few feminists decided not to eat animals. Actually, they often post about how they have been eating cevapi and pljeskavica (minced meat), sarma (minced meat and rice in cabbage), slanina (bacon), prsuta (smocked sliced meat). And indeed, most of my friends also eat animals. I also did until recently.

When you live in a society which is based on animals’ death it is hard to avoid normalization of their death just for the pure preference of taste of their meat. While you are kid your parents take you to  the countryside, you play there with animals, pet them, and for lunch your grandma slaughtered a chicken or two, grandpa slaughtered a pig or a sheep. That’s normal. While still they would not eat the dog who is guarding the sheep or a cat which gets few pieces of other animals for himself.

Actually, you do not have to go to the countryside, you can go to the market and buy yourself a piece of meat. It has no eyes, no hoofs, it does not breathe, it does not scream, does not bleed. Just a simple piece of meat, let’s say chicken breast. And you make yourself a nice chicken with potato and then you go to the protest on feminist march for example. Surely you should not go there on empty stomach, and you should definitely finally learn what your feminist friends teach you all along to love yourself and to put your basic needs on the first place. Or you go to this march and then all of you feminists and activists go together on cevapi and pljeskavica. That is normal.

At last, cevapi are very tasty.

So you realize that cevapi  do not grow on trees. Still, that death of the living creature which must be somebody grabbed, pulled to some surface, probably concrete, throw it on it, pushed its head with the knee to it, while its eyes were wide open,  jumping out of its skull, and while all the way it was screaming and kicking, to whom must be somebody then stabbed  a knife into the throat, while its body was flooded with stress hormones, aware that it is dying, screaming, wheezing, gasping, twitching at the end slowly while the blood rushed from its throat, until it stopped moving, stays below the level of your consciousness.

I remember my grandfather and how he used to kill pigs with the help of another man who would hold its legs while it would kick strongly. It was not in the countryside, but in the city center, in Belgrade, in a park where they would take the pig and kill it. After they would pierce its legs, open them wide and put hooks so that it can hang from the kids’ climber while its blood would drain in a bucket. They would cut it open and take all its organs. It is normal to see men’s hands going through the pigs entrails, taking its organs outside its body. Its just normal.

Well, it is banal to say, but pig did not want to die. And it must hurt when a knife gets stabbed into your throat and immensely stressful when you are aware you will die. Still, we, kids, we witnessed to this scenes all the time. It is normal. Once, they were slaughtering a lamb. It was very cute, and it was following us kids, I guess since its mother was not there. It had very thin legs. The sound which it made while they slaughter it was something so strange. It tried to kick with its feeble little legs and free itself, but the men grabbed it tightly and hold it with grate force. I always noticed how big their hands are on these animals’ bodies. It was screaming so strangely and it was so disturbing that some of my relatives had to leave. I never did. Like in some trans I would stay there and watch the whole thing. Look them straight in the eyes trying to figure out when it happens. This moment when they actually die. Never figured it out. Only when their body starts to relax  and finally stops moving I  knew that their life is gone. I do not know how many times I watched this and eat their ribs.

It is tasty the lamb. I liked to munch their ribs and their legs. It is crunchy. I think even now I like the taste.

It is hard to think about these images as about something extraordinary. So what? They killed some pigs and sheeps. Millions are killed every day. And anyway, there are not many opportunities when you have to think about animals’ suffering and death in our society.

There are though little bit more opportunities to think about the suffering and death of women.  About the fact that every third women was sexually harassed, suffered some violence, suffered some unwanted, man’s  big hands on her body,  which was violently manipulated and hurt.

There are little bit more opportunities to think about the fact that somebody, some man, grabbed some girl for her thin legs, pulled her to some ground, maybe concrete, pinned her down with his grown up body, stabbed his penis in it, while maybe her eyes were wide open, jumping out of her skull, while maybe she screamed and kicked, while his large and heavy hands were holding her down. Maybe her body flooded with stress hormones was just twitching in silence while he was pushing her while cumming and while she was laying there with her legs open as with hooks, as a dead pig, hanging from the kids’ climber.

That is normal. At the end, woman’s or animal’s – meat is meat.

Now, is it the same to eat cevapi and to rape girls and boys and adult women? No. It is not.

Did we in our society learned that it is normal to eat meat of completely helpless violated creatures who can suffer and do not want to die?

Did we learn that it is normal to use the body, the bones and meat of little girls, boys and women, sometimes also men, which do not want to be fucked, for fucking?

It’s not the same to eat meat and to rape. Still, is there something which is creepily similar, or the same and about which so often there is no room to think about even among the ones who see themselves as agents of justice, on the side of subaltern and weak, who say they love animals, who have them as pets?

We attuned ourselves to the suffering of many marginalized subjects. There is hermeneutical pool from which we can draw our subtle understanding of what one woman can go through on her date with the guys like Aziz Ansari, without him doing anything illegal.

There must be a possibility to attune ourselves also for the suffering and pain of the ones who cannot and will never be able to say METOO, if speech is what matters at all.